Klayman: So "Blowhard Bill" What Are You Actually Doing About This? 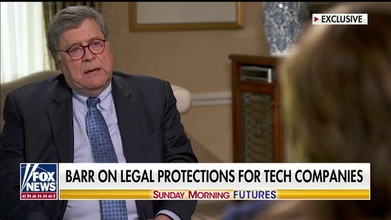 Barr made the statement during the interview, which aired on "Sunday Morning Futures," reacting to NBC's apparent influence over Google in punishing two conservative news sites over what was deemed offensive coverage of the protests following the death of George Floyd, the Minneapolis man who died in police custody on May 25.