Klayman: What Does the Deep State Have on Chief Justice John Roberts to Coerce Him Out of The "Leftist Closet"?
Go to www.FreedomWatchUSA.org to Support Our Judicial Selection Strike Force. Also Donate and Share! 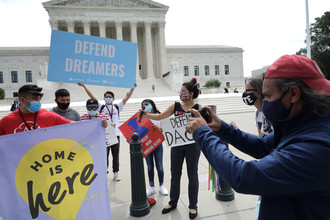 Supreme Court rules against Trump's bid to end program shielding 'Dreamer' immigrants
CNBC
June 18, 2020
The Supreme Court ruled against President Donald Trump on Thursday in a set of cases over his effort to end the Obama-era immigration program known as Deferred Action for Childhood Arrivals, or DACA.

The opinion was authored by Chief Justice John Roberts, a conservative, and joined by the court's four liberals. Roberts reasoned that the Trump administration's termination of the program was "arbitrary and capricious," in violation of federal law that governs administrative procedure.

The ruling will protect hundreds of thousands of young immigrants who have been shielded from deportation and allowed to receive work permits under the program. There were about 700,000 DACA recipients at the time Trump ordered the program to wind down in September 2017.