Will the 'Law and Order' President Pardon Roger Stone? 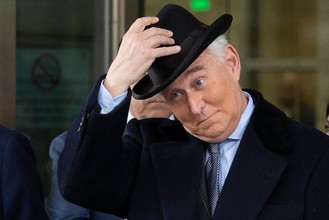 By Jeffrey Crouch, opinion contributor
TheHill
June 12, 2020
Facing an ongoing pandemic and societal unrest over the death of George Floyd that reached the White House, President Trump on June 1 channeled Richard Nixon and declared "I am your president of law and order." Trump said that he was "dispatching thousands and thousands of heavily armed soldiers" and other personnel to quell unrest. He also criticized as "weak" the response of several governors to the protesters.

On June 4, Trump tweeted about his longtime friend and political adviser, Roger Stone, a Nixon memorabilia aficionado who sports a tattoo of the 37th president on his back. Stone is supposed to report to federal prison by the end of this month to start serving a three-plus-year term for lying, obstructing justice and witness tampering. The president cryptically typed that Stone should "sleep well at night," an apparent hint at a presidential pardon.