Klayman: Military Cutting and Running From Doing Its Job to Restore Law and Order After Leftists Set Fire to a Church in Front of White House! People Left Defenseless!
Go to www.FreedomWatchUSA.org and Support Our Citizens Grand Juries and Join Our Justice League! 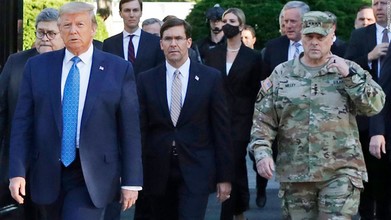 Top general apologizes for appearing in photo-op with Trump after forceful removal of protesters
By Ryan Browne, Barbara Starr and Zachary Cohen
CNN
June 11, 2020
Washington (CNN)America's top general has apologized for appearing in a photo-op with President Donald Trump following the forceful dispersal of peaceful protesters outside the White House last week, calling the move a "mistake" and saying his presence "created a perception of the military involved in domestic politics."

Gen. Mark Milley, the chairman of the Joint Chiefs of Staff. said during a pre-recorded speech released on Thursday that he regrets accompanying Trump on a walk from the White House to St. John's Church last week where he was photographed wearing his combat uniform and moving with the President's entourage through Lafayette Square.

The images provoked a swift wave of criticism from lawmakers and several senior former military officials who said they risked dragging the traditionally apolitical military into a contentious domestic political situation.