Klayman: Pardon of Roger Stone Will Put Trump Reelection in Greater Jeopardy! Don't Do It, Mr. President If You Truly Stand for Law and Order!
Go to www.FreedomWatchUSA.org and Support Our Citizens Grand Juries and Join Our Justice League! 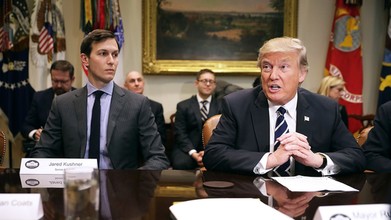 "He's Going to Broom Kushner and Parscale": "Malignantly Crazy" About Bad Poll Numbers, Trump Is Thinking of Replacing His Son-In-Law
By Gabriel Sherman
Vanity Fair
June 9, 2020
In Donald Trump's West Wing, being a member of the Trump family has historically been the ultimate job security. But that truism is being stress-tested after a run of polls consistently show Trump losing to Joe Biden at this stage of the race—a CNN poll this morning has him down 14 points. According to a source close to the White House, Trump has mulled taking oversight of the campaign away from his son-in-law Jared Kushner. "Trump is malignantly crazy about the bad poll numbers," a former West Wing official said. "He's going to broom Kushner and [Brad] Parscale—the numbers are not getting better," a Republican close to the campaign said.

Long before the reelection campaign went sideways, Trump frequently blew up at Kushner. For instance, former West Wing officials recall how Trump hated when Kushner received too much positive press (In January, Trump was rankled when Kushner's portrait graced the cover of Time). "Any time Jared is in the papers, Trump complains, 'We have to get Jared back to New York!'" said a Republican who heard Trump make the comment. In the end, the source cautioned that Trump won't push Kushner out. "This is typical with him and Jared," the source said.