Klayman: Trump Pardon of Stone Would Show He Condones Lying Under Oath -- Exactly How the President Was Victimized in FBI FISA Warrants!
Go to www.FreedomWatchUSA.org and Support Our Citizens Grand Juries and Join Our Justice League! 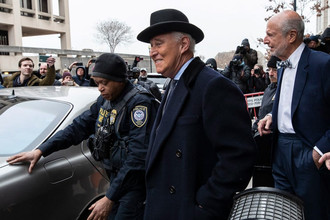 Trump strongly hints at pardon of political adviser Roger Stone, saying he should 'sleep well at night'
By John Wagner
Washington Post
June 4, 2020
President Trump strongly hinted Thursday at a pardon of friend and longtime political adviser Roger Stone, who has been ordered to report to prison later this month. Trump said Stone was the "victim of a corrupt and illegal Witch Hunt" and should "sleep well at night."

Trump made the comments on Twitter in response to a tweet by conservative activist Charlie Kirk, who complained that Stone would be serving more time in prison than "99% of these rioters destroying America," a reference to violent protests in the wake of the death in police custody of Minneapolis man George Floyd.

"This isn't justice," Kirk said in his tweet, asking his Twitter followers to retweet him "for a full pardon of Roger Stone!"