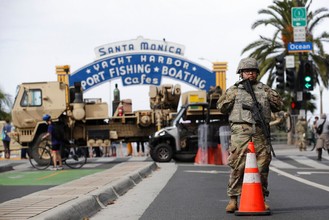 By Bradford Betz
Fox News
June 2, 2020
A California liquor store owner said he stood in front of his business in Santa Monica armed with an AR-15 to discourage looters.

The looting in Santa Monica came amid nationwide unrest sparked by the death of George Floyd, a black Minneapolis man who died last week after a white police officer held his knee on Floyd's neck for more than eight minutes.

The owner of the liquor store, who only identified as Joe, told CBSLA he and his friends stood in front of the business with guns to discourage potential looters.