Klayman: Antifa and the Left Have Declared and Are Now Waging War Against We the People to Take Down the Republic!
Go to www.FreedomWatchUSA.org and Support Our Citizens Grand Juries and Join Our Justice League! 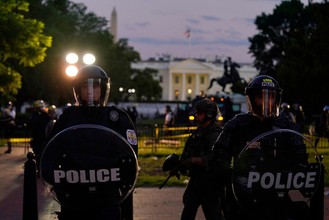 Secret Service agents wounded outside White House, car bombs feared; official says Trump was taken to bunker
By Gregg Re
Fox News
June 1, 2020
Numerous Secret Service agents were injured, fires set by rioters blazed near the White House and authorities were searching for car bombs late Sunday as protests over the death of George Floyd continued to roil the capital just two days after President Trump had to be taken to a bunker for his safety.

A senior official in the direct chain of command for defending Washington D.C. told Fox News of the injuries to Secret Service agents, some of whom were hurt by rioters throwing bottles and Molotov cocktails in Lafayette Park, just across from the presidential residence. The official initially put the number of agents injured at over 50, but that may have referred to the weekend toll; the Secret Service has since said the number injured on Sunday was 14.

As observed in New York City and elsewhere, groups in D.C. are planting cars filled with incendiary materials for future use, Fox News is told. U.S. Marshals and Drug Enforcement Administration (DEA) agents were deployed to the streets of D.C. in an extraordinary move to beef up security alongside local police and Homeland Security agents, including the Secret Service, the Justice Department confirmed late Sunday. Fox News has learned U.S. Attorney for D.C. Mike Sherwin is heavily involved in the operation.