Klayman: The Clintons Likely Threatened or Paid Gabbard Off!
Go to www.FreedomWatchUSA.org and Support Our Citizens Grand Juries and Join Our Justice League! 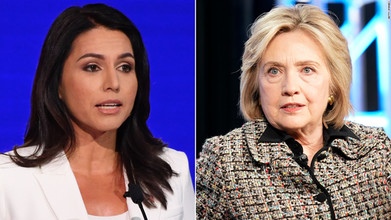 Tulsi Gabbard drops defamation lawsuit against Hillary Clinton
By Dan Merica
CNN
May 28, 2020
Washington (CNN)Rep. Tulsi Gabbard dropped the defamation lawsuit she filed against Hillary Clinton on Wednesday, ending a short-lived legal battle where the congresswoman contended the former secretary of state and Democratic presidential nominee "lied about her ties to Russia" during a 2019 interview.

The lawsuit stemmed from Clinton saying that Gabbard, then a 2020 presidential candidate, was being groomed to run as a third-party candidate and was a favorite of the Russians. Clinton, in the same interview, suggested that the person she was talking about was a "Russian asset," while not naming the Hawaii Democrat.