Klayman: Biden's Condescension Toward Blacks Is Racist!
Go to www.FreedomWatchUSA.org to Join and Support Our Leftist Media Strike Force! Share and Donate 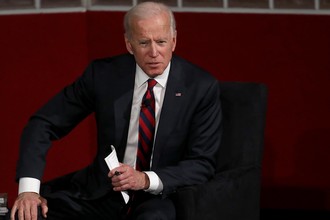 Biden: 'If you have a problem figuring out whether you're for me or Trump, then you ain't black'
By Quint Forgey
POLITICO
May 22, 2020
Former Vice President Joe Biden on Thursday emphatically defended his ties to the African American community — telling a popular black radio personality that he "ain't black" if he was still weighing whether to support Biden or President Donald Trump in November's general election.

The remarks from the presumptive Democratic presidential nominee came during an at-times contentious interview on "The Breakfast Club" that aired Friday morning, during which co-host Charlamagne tha God challenged Biden over his decadeslong record on racial issues and current contemplation of a black, female running mate.

"I'm not acknowledging anybody who is being considered, but I guarantee you, there are multiple black women being considered. Multiple," Biden said of his search process for a vice presidential nominee.