Barr Doesn't Expect Review of Russia Probe Will 'Lead to a Criminal Investigation' of Obama and Biden
Go to www.FreedomWatchUSA.org and Support Our Citizens Grand Juries and Join Our Justice League! 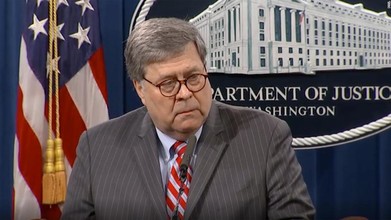 By Katelyn Polantz and Devan Cole
CNN
May 18, 2020
Washington (CNN)Attorney General William Barr on Monday said Barack Obama and Joe Biden are unlikely to be under criminal investigation in a review of the Russia probe that began in 2016 -- addressing simmering accusations by President Donald Trump against his predecessor and his 2020 opponent.

Barr said he was attempting to curtail the politicization of Justice Department investigations, yet his comments could fan speculation from right-wing commentators.

"Whatever their level of involvement based on the level of information I have today, I don't expect Mr. Durham's work will lead to a criminal investigation of either man," Barr said Monday at a press conference, referring to the US Attorney John Durham's ongoing review of the early Russia investigation, which ultimately led to the appointment of special counsel Robert Mueller to examine election interference and coordination with the Trump campaign.