Klayman: U.S. Government Financed the Wuhan Lab That Created Bioweapon of COVID-19! Join and Support Our Class Action and Criminal Complaint vs. ChiComs! 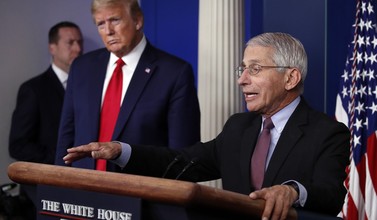 Anthony Fauci should explain '$3.7 million to the Wuhan laboratory'
By Cheryl K. Chumley
The Washington Times
April 27, 2020
President Donald Trump's legal counsel, Rudy Giuliani, in a recent chat on "The Cats Roundtable" on New York AM 970 radio, suggested a good U.S. attorney general move about now would be to investigate key members of the past Barack Obama administration on the Wuhan, China, laboratory, to see what they knew and when they knew it.

And then he mentioned Dr. Anthony Fauci specifically.

And then he accused the prior Team Obama of sending $3.7 million to the lab in 2014 — at a time when that same Team Obama had banned the funding of any lab that was involved in virus experimentation.