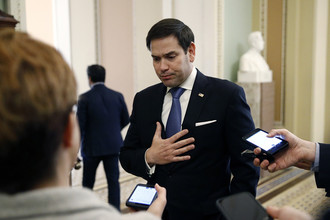 By Ryan Lizza
POLITICO
April 27, 2020
Crises nearly always create political upheaval. In recent history the catastrophes of 9/11 and the Great Recession both defined American politics for the decade that came after each event.

The Covid-19 crisis, which has already killed far more Americans than the 9/11 attacks and the wars in Afghanistan and Iraq that were waged in response, seems likely to have a similar effect. And while the political impact of a deadly pandemic is by no means the most important question of the moment, the Trump administration's embrace of a massive government intervention to cushion the economic impact of our national self-quarantine has intensified a debate on the right about Republicans and the role of government.

Anyone who watched the 2009 stimulus debate has to be flabbergasted by the Republican response in 2020. Back then, President Barack Obama struggled to pass a $900 billion bill even as his top economists believed the country needed a package several times that size. The Obama stimulus received no Republican votes in the House and three Republican votes in the Senate, including Pennsylvania's Arlen Specter, who soon joined the Democratic Party.