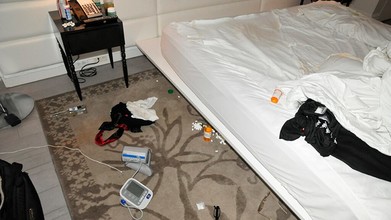 The photos released Wednesday show vomit-stained and rumpled bed sheets, a box for a party light disco ball, spilled white pills on the carpet and a vial of a drug often used for erectile dysfunction. But the newly released photos and officer body-cam video shed no further light on what Gillum was doing or why he was there last month.

Fire rescue crews and officers were called to the Miami Beach hotel March 13 for a suspected drug overdose. Police say Gillum and two other men were in the hotel room and Gillum was inebriated.