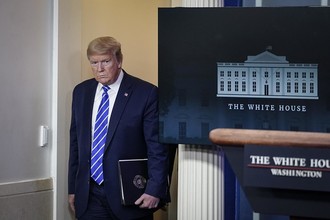 By Alex Isenstadt
POLITICO
April 24, 2020
Senior Republicans and President Donald Trump's campaign are wrestling with how to best position him for November as the coronavirus poses a grave threat to his reelection.

With Trump's poll figures sagging in key battleground states six months out from the election, the Republican National Committee has launched a massive effort to reach some 20 million swing voters to make an affirmative case for his performance. But Trump campaign officials are taking a different approach: Rather than devoting resources to boost Trump's numbers, which haven't moved materially since he was elected, they want to go scorched earth against Joe Biden.

Over the past few weeks, the Trump campaign has unveiled a digital ad savaging Biden over his relationship with China. It also launched a weekly online program dubbed "War Room" in which presidential advisers take aim at the former vice president on an array of issues. The campaign has also weighed a major TV offensive going after Biden.