Klayman: A Time Tested Fundraising Method for Those Convicted of Crimes Who Set up Legal Defense Funds! 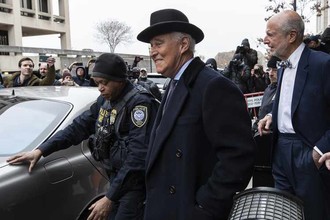 Roger Stone: Praying for a Pardon With 'Full Faith in Jesus' | RealClearPolitics
By Myra Adams
Real Clear Politics
April 23, 2020
Almost any list of top newsmaking and colorful political personalities in recent U.S. history would include Roger Stone. An unconventional Republican operative since the 1970s, Stone hit the apex of his flamboyant career in 2016 with the election of his longtime friend and former client Donald Trump.

That achievement was the focus of a popular 2017 documentary, "Get Me Roger Stone." In a January 2019 piece I wrote for RealClearPolitics, I noted that the film compares Stone to "Forrest Gump, the fictional character who found himself at the center of every landmark political and cultural event in the mid- to late-20th century."

Roger now finds himself in an unexpected predicament, one that has him praying, literally, that Trump will grant him a presidential pardon. Two months ago, Stone was sentenced to 40 months in prison after being convicted on five counts of lying to Congress, one count of witness tampering, and one count of obstructing the congressional investigation into Russia's interference in the 2016 election. Upon hearing the sentencing news, Trump said, "I'd love to see Roger exonerated."