Trump Says Fox, Chris Wallace 'on a Bad Path' After Pelosi Appearance on Network
Go to www.FreedomWatchUSA.org to Join and Support Our Leftist Media Strike Force! Share and Donate 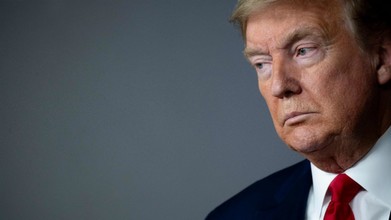 By Justine Coleman
TheHill
April 19, 2020
President Trump criticized Fox News and host Chris Wallace on Sunday, saying they are "on a bad path" after Speaker Nancy Pelosi (D-Calif.) appeared on "Fox News Sunday" for the first time since 2017.

The president in a tweet also called the Speaker "an inherently 'dumb' person."

"She wasted all of her time on the Impeachment Hoax," he tweeted, referring to Pelosi.

"She will be overthrown, either by inside or out, just like her last time as 'Speaker,'" he added. "Wallace & @FoxNews are on a bad path, watch!"