Roger Stone's Motion for New Trial Denied, Must Report to Prison in 14 Days 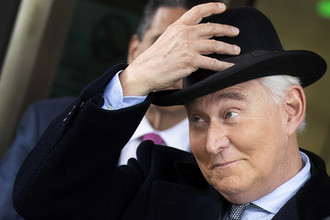 Newsweek
April 17, 2020
United States District Judge Amy Berman Jackson denied a motion requesting a new trial for Roger Stone, the convicted former adviser to President Donald Trump, in a Thursday ruling. Court documents show that Stone must appear in person "at the institution designated by the Bureau of Prisons" within 14 days to serve out his sentence. Stone is currently out on bond.

Stone was found guilty in 2019 of obstructing an investigation conducted by Congress, witness tampering and making false statements to the U.S. Government in relation to alleged meddling in the 2016 election by Russia.

In her decision, Judge Berman concluded that Stone's defense had not presented the grounds for a retrial and had not given the court "any reason to believe that there has been a 'serious miscarriage of justice.'"