Klayman: Dems Get Most of Blame for Distracting Witch Hunts and Impeachment But Leftist pro-Dem NYT Won't Publish That!
Go to www.FreedomWatchUSA.org to Join and Support Our Leftist Media Strike Force! Share and Donate 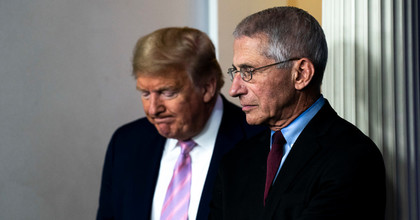 Trump Lashes Out at Fauci Amid Criticism of Slow Virus Response
By Peter Baker
New York Times
April 13, 2020
WASHINGTON — President Trump publicly signaled his frustration on Sunday with Dr. Anthony S. Fauci, the federal government's top infectious disease expert, after the doctor said more lives could have been saved from the coronavirus if the country had been shut down earlier.

Mr. Trump reposted a Twitter message that said "Time to #FireFauci" as he rejected criticism of his slow initial response to the pandemic that has now killed more than 22,000 people in the United States. The president privately has been irritated at times with Dr. Fauci, but the Twitter post was the most explicit he has been in letting that show publicly.

The message Mr. Trump retweeted came from a former Republican congressional candidate. "Fauci is now saying that had Trump listened to the medical experts earlier he could've saved more lives," said the tweet by DeAnna Lorraine, who got less than 2 percent of the vote in an open primary against Speaker Nancy Pelosi last month. "Fauci was telling people on February 29th that there was nothing to worry about and it posed no threat to the US at large. Time to #Fire Fauci."