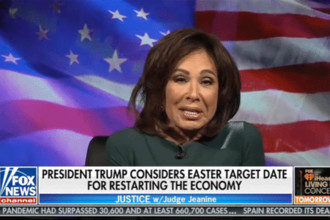 By Thom Geier
TheWrap
March 29, 2020
Jeanine Pirro's Fox News show got a late start on Saturday night due to "technical difficulties" — but when the former New York state judge did appear nearly 15 minutes into her show, her usually perfectly coifed hair appeared disheveled and she seemed to many viewers to be tipsy in her verbal delivery.

"We apologize for the technical difficulties," Pirro said when she finally appeared about a quarter into the one-hour broadcast after anchor Jackie Ibanez covered for her initial absence.