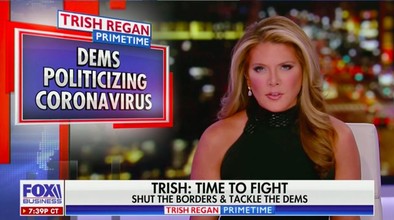 After Getting Benched For Coronavirus 'Scam' Coverage
By Josh Feldman
Mediaite
March 28, 2020
In a statement provided to Mediaite Friday, the network announced, "FOX Business has parted ways with Trish Regan — we thank her for her contributions to the network over the years and wish her continued success in her future endeavors."

Recently Regan came under scrutiny for her commentary calling the media coverage of coronavirus another "impeachment scam" trying to "destroy the president."

A few days later the network announced her primetime show would be going on hiatus, citing demands of coronavirus coverage.

At the time the network said, "FOX Business' primetime programs Trish Regan Primetime and Kennedy will both be on hiatus until further notice. Due to the demands of the evolving pandemic crisis coverage, we are deploying all resources from both shows for staffing needs during critical market hours. FOX Business will run long form programming in primetime for the foreseeable future."