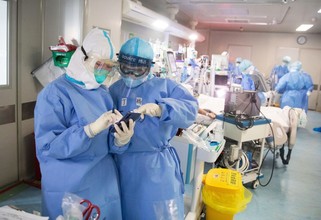 The Epoch Times
March 23, 2020
The Chinese regime has maintained that there have been no new domestic infections of the CCP virus in the entire country since March 18.

Local authorities say that the epidemic has leveled off, as they ease travel restrictions and tell people to return to work.

But the situation in the ground zero of China's epidemic, the city of Wuhan, is much worse than what has been officially reported, according to a series of internal government documents obtained by The Epoch Times.