Klayman: Omar's New "Husband" Should Sleep With One Eye Open! 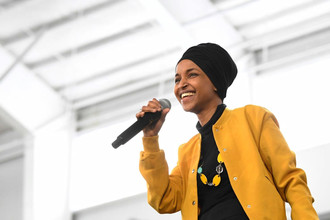 Omar (D-Minn.) on Wednesday announced on Instagram that she had married Timothy Mynett, and the couple filed their marriage license in Washington that same day.

Following Omar's marriage announcement, conservative critics raised concerns about payments by her campaign to E Street Group, which is run by Mynett.