Klayman: Totally Predictable: Hillary Thinks She Is Above the Law! 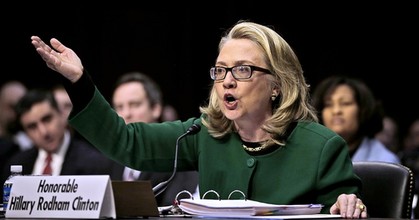 Hillary Clinton asks appeals court to overturn order for deposition about email server and Benghazi
Washington Examiner
March 14, 2020
Hillary Clinton asked an appeals court on Friday to overturn a judge's order for her to appear for a sworn deposition about her use of a private email server and the 2012 Benghazi terrorist attack.

The case stems from a Freedom of Information Act lawsuit brought by the conservative watchdog Judicial Watch against the former secretary of state. Earlier this month, U.S. District Court Judge Royce Lamberth ruled, "The Court agrees with Judicial Watch — it is time to hear directly from Secretary Clinton." The judicial opinion also ordered former Clinton chief of staff Cheryl Mills to be deposed.

Clinton's legal team responded with an 83-page petition for a writ of mandamus filed with the U.S. Court of Appeals for the D.C. Circuit, calling the district ruling outrageous and asking the appeals court to order the lower court to correct the ruling.