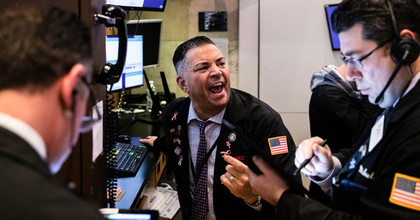 By Emily Cochrane, Jeanna Smialek and Jim Tankersley
New York Times
March 13, 2020
WASHINGTON — Financial markets plunged on Thursday in the biggest one-day drop since the Black Monday stock market crash of 1987, and Congress neared a deal with the White House on a sweeping economic rescue package to respond to the colossal effect of the coronavirus pandemic.

After a day of intense negotiations between Speaker Nancy Pelosi of California and the Treasury secretary, Steven Mnuchin, Ms. Pelosi told reporters that "we've resolved most of our differences" and the House would vote on Friday on the measure "one way or another." It would then go to the Senate, which called off a recess that had been scheduled for next week in anticipation of a compromise.

The legislation, according to a letter Ms. Pelosi sent to her members, will include enhanced unemployment benefits, free virus testing, aid for food assistance programs and federal funds for Medicaid. The package also ensures 14 days of paid sick leave, as well as tax credits to help small- and medium-size businesses fulfill that mandate. Language was still being drafted for provisions related to family and medical leave, according to a Democratic aide, as staff members worked through the night to prepare the bill.