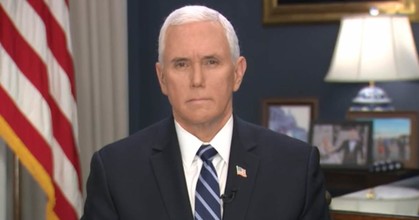 NBC News
March 12, 2020
Vice President Mike Pence said Thursday on "TODAY" that there has been "irresponsible rhetoric" from people who have downplayed the seriousness of the U.S. coronavirus outbreak.

In an interview on the "TODAY" show, Savannah Guthrie asked what message Pence sends to people who aren't afraid of the coronavirus and think it's just politics and hype, quoting from President Donald Trump who said on Monday that the "fake news media and their partner, the Democrat Party, is doing everything to inflame the coronavirus situation."

"There's been some irresponsible rhetoric, but the American people should know President Trump has no higher priority than the health and safety and well being of the people of this country," Pence said in response but it was not clear who he was referring to.