Klayman: Biden Is More Than Just Senile: It Would Appear He Has Severe Dementia and the Possible Onset of Alzheimer's! He Had Trouble Even Distinguishing His Wife From Her Sister On "Super Thursday"! 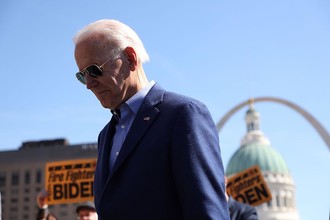 Trump and GOP mount coordinated campaign to paint Biden as senile
By Alex Isenstadt
POLITICO
March 10, 2020
President Donald Trump stood before about 500 of the Republican Party's biggest patrons at his Mar-a-Lago resort on Friday and raised a topic few in the audience expected: Joe Biden's mental capacity.

Trump walked the donors through a list of Biden's recent verbal stumbles, such as his recent declaration that he was running for Senate and his assertion that 150 million Americans had been killed by gun violence since 2007. Trump questioned whether the former vice president had the mental stamina to sustain the rigors of a general election campaign.

Then, the president appeared to give donors permission to leak his remarks about Biden to the media.