Klayman: Actually It's the Reverse With "Worthless" AG Bill Barr -- the Tool of the Republican Establishment!
Go to www.FreedomWatchUSA.org and Support Our Citizens Grand Juries and Join Our Justice League! 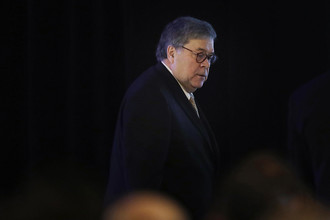 Bad news for Silicon Valley: William Barr is taking control of antitrust probes
By Leah Nylen
POLITICO
March 3, 2020
Attorney General William Barr has spent months taking greater control of the Justice Department's antitrust probes into the big tech companies, a development that could increase the peril for major players like Google and Facebook.

Barr has centralized oversight of antitrust matters under a handful of appointees in his office and that of his deputy attorney general, Jeffrey Rosen. Those moves have sidelined the Antitrust Division's current leadership, headed by Assistant Attorney General Makan Delrahim, who for the past year has been the public face of DOJ's investigations into Silicon Valley's treatment of its users and customers.

Delrahim and his No. 2, Deputy Assistant Attorney General Barry Nigro, were both recused from the Google probe earlier this month, for reasons that include Delrahim's prior legal work for the search giant. That has left the antitrust investigation in the hands of Ryan Shores, a lawyer in Rosen's office, and Alex Okuliar, an appointee who joined the department less than a month ago.