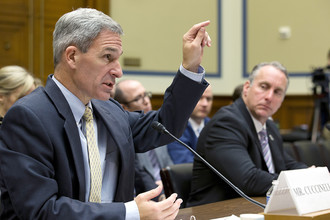 Cuccinelli, an immigration hard-liner who was previously attorney general in Virginia, became acting head of USCIS in June, assuming the newly created role of "principal deputy director." In November, Cuccinelli also assumed the position of "senior official performing the duties of the deputy secretary" at USCIS' parent agency, the Department of Homeland Security.