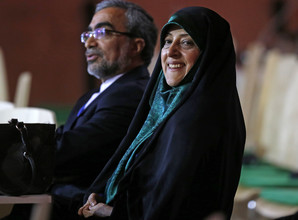 Iran's vice president contracts coronavirus as country's tally spikes again
By Alexandria Hein
Fox News
February 27, 2020
Iran's vice president tested positive for the novel coronavirus days after the country's health minister was also struck down by the illness that has killed 26 people in the region, marking the highest number of fatalities to occur outside of mainland China.

Iranian Vice President for Women and Family Affairs Masoumeh Ebtekar is now among the 254 cases reported in the country, which has seen a spike in illnesses over the last several days. Ebtekar, a spokeswoman for the 1979 hostage-takers who seized the U.S. Embassy in Tehran, is reportedly self-isolating at her home.