Klayman: From a Duke Alum: Duke Losses Likely Result of Its B-Ball Team That Lacks Commitment and Does Not Represent the Study Body! "One and Done" Is Truly That! Duke "Team" Is "Done! 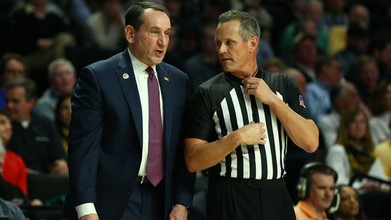 Duke stunned again, this time by Wake Forest
ESPN.com
February 26, 2020
Seventh-ranked Duke allowed 113 points in a double-overtime loss to Wake Forest on Tuesday night, tying the most points a Mike Krzyzewski team has ever allowed in his coaching career and also tying the second most allowed by the Blue Devils in any game.

Brandon Childress missed his first 10 shots before hitting a tying 3-pointer with 15.5 seconds left in regulation. And once the game went into a second extra period, Childress buried another on the first possession to put the Demon Deacons ahead to stay, sending them to their first win -- 113-101 -- against the Blue Devils in nearly six years.

Duke was an 11-point favorite at Caesars Sportsbook.