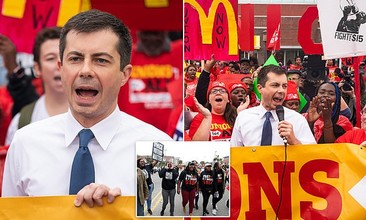 Buttigieg was front and center as striking workers - dressed to match the 'Golden Arches' in red and yellow - marched to a McDonald's in the southern city. The group even paraded through the restaurant's drive-thru.

But Buttigieg's appearance attracted its own protest, as a group of 'Black Voters Matter' demonstrators chanted 'Pete can't be our president, where was $15 in South Bend?' in the direction of the 2020 Democratic candidate.