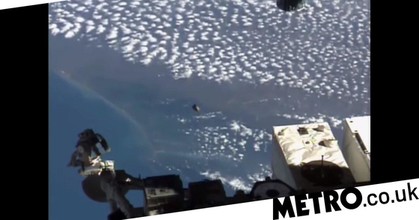 By Jeff Parsons
Metro
February 25, 2020
Cameras on board the International Space Station (ISS) have picked up a strange, cone-shaped object in orbit around Earth.

The unexplained object seemingly keeps pace with the space station as the cameras remain locked on it for over 20 minutes.

Naturally, the footage has been picked up and circulated around parts of the internet dedicated to discussing alien technology. Fanning the conspiracy flames even further, the camera zooms in on the object at one point suggesting that Nasa is aware of its presence.