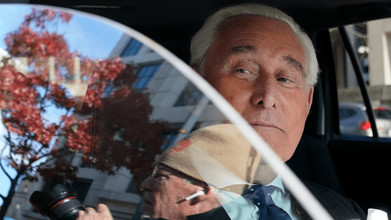 Inside the Roger Stone Deposition in Corsi/Klayman Defamation Suits
POLITICO
February 24, 2020
Roger Stone, who was sentenced by a federal judge Thursday to more than three years in prison for impeding Congressional and Justice Department investigations into Russian interference in the 2016 presidential race, spent part of two days last week submitting to a videotaped deposition in connection with several civil suits. The roughly five-and-a-half hours of testimony given over two days is replete with bitter, caustic exchanges between Stone and a longtime conservative gadfly, lawyer and activist who is shepherding the litigation, Larry Klayman. Stone, a Republican political strategist, served as a consultant on a longshot bid for the U.S. Senate Klayman mounted in 2004. The association ended in acrimony, with Stone claiming he was never paid and Klayman claiming Stone spread unfavorable stories about him. As the video shows, neither man has buried the hatchet.