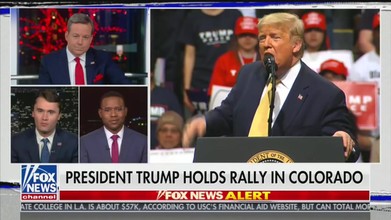 By Justin Baragona
The Daily Beast
February 21, 2020
President Donald Trump has once again taken aim at a Fox News host for being insufficiently loyal to him, mocking anchor Neil Cavuto at a Colorado rally on Thursday night hours after blasting him on Twitter over a segment about Trump's "cringeworthy" 2016 debate performances.

Fox News contributor Richard Fowler and anchor Ed Henry, however, jumped to the defense of their network colleague minutes after Trump's remarks aired, calling the president's remarks "problematic" and "un-American."

The president, who has made it a habit of taking shots at the conservative-leaning network when he feels some of its hosts and commentators are not showing him enough fealty, took issue Thursday afternoon with Real Clear Politics columnist A.B. Stoddard saying his 2016 debate performances were "disastrous" during Cavuto's show.