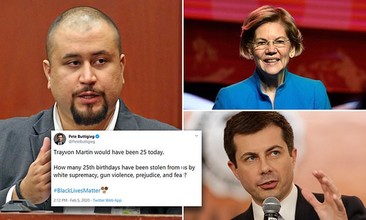 By Keith Griffith
Mail Online
February 20, 2020
Zimmerman filed the lawsuit in Polk County, Florida on Tuesday, in response to Warren and Buttigieg's tweets on February 5, which would have been Martin's 25th birthday.

In 2012, Zimmerman fatally shot 17-year-old Martin during an altercation, and was acquitted on all charges in the case on grounds of self-defense.

His new suit accuses the two Democrat candidates of using Martin's death 'as a pretext to demagogue and falsely brand Zimmerman as a white supremacist and racist to their millions of Twitter followers.'