Klayman: As I Predicted: Let the Dems Impeach AG Barr for Whatever Reason! Good Riddance!
Go to www.FreedomWatchUSA.org and Support Our Citizens Grand Juries and Join Our Justice League! 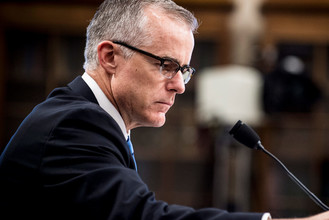 DOJ will not charge ex-FBI deputy director Andrew McCabe, a frequent Trump target
By Kevin Breuninger, Christina Wilkie
CNBC
February 14, 2020
The Department of Justice said Friday that it has dropped its criminal investigation against former FBI Deputy Director Andrew McCabe and will not press charges against him.

McCabe was being investigated by the DOJ regarding allegedly improper leaks he made to journalists related to an investigation into Hillary Clinton, and his claims to investigators about those leaks.

The DOJ's internal watchdog concluded that McCabe "lacked candor, including under oath" when answering questions about the leaks.