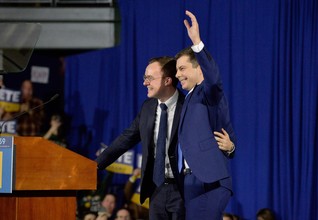 Washington Post
February 14, 2020
Allies of President Trump have sharply focused attention on the sexual identity of presidential contender Pete Buttigieg in recent days, questioning in stark terms whether Americans are ready for a gay candidate who kisses his husband onstage.

The attacks are prompting blunt responses from Buttigieg's allies and even his Democratic rivals, who call the remarks inappropriate and offensive. The exchanges were ignited by radio host Rush Limbaugh, who received the Presidential Medal of Freedom from Trump last week and who framed his comments as an ostensible analysis of how Democrats feel.