Klayman: This Was Orchestrated With the White House: The Problem Is That Barr Is as Worthless as Sessions Was!
Go to www.FreedomWatchUSA.org and Support Our Citizens Grand Juries and Join Our Justice League! 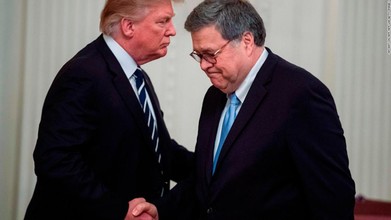 Barr's stunning Trump rebuke sparks debate over his true motives
By Analysis by Stephen Collinson
CNN
February 14, 2020
Washington (CNN)William Barr's sharp public rebuke of Donald Trump's legal meddling was an astonishingly rare show of dissent from a top Cabinet chieftain -- but the attorney general's record as the President's protector suggests there may be more to the latest Washington mystery than first meets the eye.

Barr's blunt warning that Trump's constant Twitter commentary makes it impossible to do his job broke like a thunderclap Thursday afternoon. It set off a deluge of speculation about his motives and potential reprisals from a President who brooks no disloyalty.

On the face of it, Barr's comments in an ABC News interview look like a daring assertion of independence amid the storm over Trump's intervention in the sentencing process for his political trickster Roger Stone.