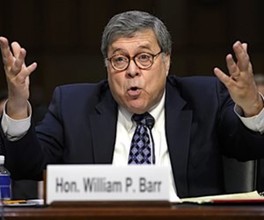 By Eric Mack
Newsmax
February 13, 2020
Attorney General William Barr shot back on Thursday at President Donald Trump's recent stream of tweets, calling for his boss to stop discussing criminal cases publicly and saying he will not "be bullied or influenced by anybody."

"I think it's time to stop the tweeting about Department of Justice criminal cases," Barr told ABC News in an exclusive interview.

Later in the afternoon, in an appearance on Fox News' "Special Report With Bret Baier," Senate Majority Leader Mitch McConnell, R-Ky., seemed to side with Barr on the issue.