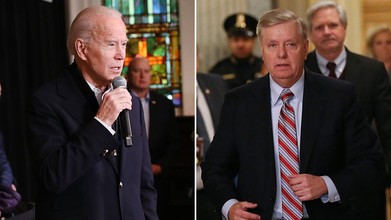 Plan to probe Bidens sparks GOP divisions
By Jordain Carney
TheHill
February 8, 2020
A pledge to investigate the Bidens and Ukraine once the impeachment trial wraps is sparking divisions among Senate Republicans.

President Trump and top allies have homed in on former Vice President Joe Biden's push to oust a top Ukrainian prosecutor and Hunter Biden's work for Burisma Holdings, a Ukrainian gas company, as they've sought to counterprogram on the sidelines of the months-long impeachment drama.

Now, with the trial in the rearview mirror, that chatter is set to move to center stage as Republicans strategize over their next steps. Senate Judiciary Committee Chairman Lindsey Graham (R-S.C.), a vocal ally of Trump's, is pledging "oversight."