Klayman: The Common Feature of the Democrats Is That They Are Nearly All Low Class, Biden in Particular!
Go to www.FreedomWatchUSA.org and Support Our Citizens Grand Juries and Join Our Justice League! 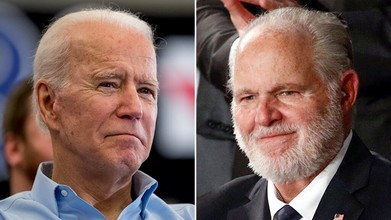 Biden criticizes Limbaugh's Medal of Freedom award: 'I don't think he understands the American code of decency and honor'
By Vandana Rambaran
Fox News
February 6, 2020
Democratic hopeful Joe Biden slammed conservative talk show host Rush Limbaugh as undeserving of the Presidential Medal of Freedom and criticized President Trump's motives for awarding it at the State of the Union on Tuesday night.

Biden, speaking to CNN's Anderson Cooper at a town hall event in New Hampshire on Wednesday, said Trump's decision to award the highest civilian honor in the nation to Limbaugh was "driven more by trying to maintain [his] right-wing political credentials than it is anything else."

The award was bestowed on Limbaugh just hours after he announced he is battling stage 4 lung cancer, which will cause him to miss airtime in the coming months.