Klayman: Roberts Proves Again He Is a Dishonest "Closet Leftist Democrat"! He Is the One Who Should Be Impeached!
Go to www.FreedomWatchUSA.org and Support Our Citizens Grand Juries and Join Our Justice League! 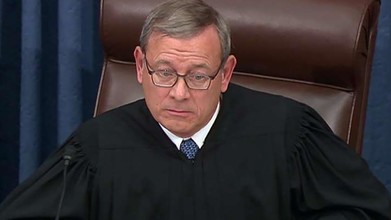 Chief Justice of the United States John Roberts blocked Kentucky Republican Sen. Rand Paul from posing a question during the Senate impeachment trial Wednesday that would have named the alleged whistleblower at the center of the case, Fox News is told — and Paul may try to force the issue during the question-and-answer session that begins Thursday afternoon.

Roberts, for now, has ball control because he actually receives the questions in note cards from senators, then reads the question aloud in the Senate chamber to be answered by either House Democratic managers or Trump's defense team. But Fox News has learned Roberts may soon lose his grip on the proceedings amid a torrent of criticism both inside and outside the Senate.