Klayman: I Have Had the Same Experience With Hillary Clinton but We Served Her at Events!
Go to www.FreedomWatchUSA.org and Support Our Citizens Grand Juries and Join Our Justice League! 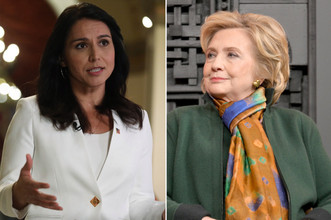 "I find it rather unbelievable that Hillary Clinton is so intimidated by Tulsi Gabbard that she won't accept service of process," the congresswoman's attorney, Brian Dunne, told The Post. "But I guess here we are."

Dunne said their process server first attempted to effect service at Clinton's house in Chappaqua on Tuesday afternoon — but was turned away by Secret Service agents.