Trump Predicts 'Beginning of the End' for Fox News
Go to www.FreedomWatchUSA.org to Join and Support Our Leftist Media Strike Force! Share and Donate 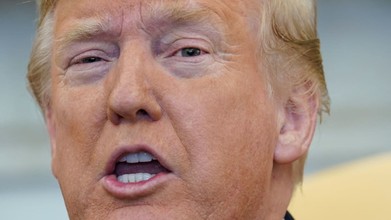 By Matt Wilstein
The Daily Beast
January 29, 2020
President Donald Trump lashed out Tuesday morning at Fox News even as the network continued to defend him at every turn of the ongoing impeachment trial. "Really pathetic how @FoxNews is trying to be so politically correct by loading the airwaves with Democrats like Chris Van Hollen, the no name Senator from Maryland," Trump tweeted, equating political correctness with any attempt to hear from the "other" side.

"So, what the hell has happened to @FoxNews," he continued. "Only I know! Chris Wallace and others should be on Fake News CNN or MSDNC. How's Shep Smith doing? Watch, this will be the beginning of the end for Fox, just like the other two which are dying in the ratings. Social Media is great!"

The president appeared to be referencing recent moments when Fox News Sunday host Chris Wallace has dared to challenge his most fervent defenders on-air, be it lawyer Alan Dershowitz and conservative pundit Katie Pavlich. The Daily Beast reported this month that MSNBC is in talks with Shepard Smith about possibly joining that network after his abrupt exit from Fox last year. Read it at Twitter