Klayman: Freedom Watch Success! We Got the Ball Rolling on This With Complaints at DHS and in Court! 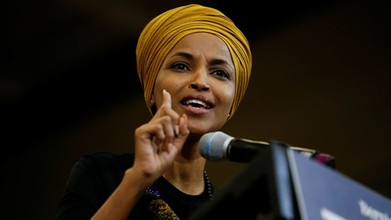 FBI Investigating Whether Ilhan Omar Married Her Brother | National Review
National Review
January 28, 2020
The FBI is looking into reports that Rep. Ilhan Omar married her brother in order to ease his immigration to the U.S., the New York Post reported on Sunday.

Two agents interviewed a person with knowledge of the case in Minnesota in mid-October. The person presented a trove of documents relating to the marriage of Omar and Ahmed Nur Said Elmi in 2009.

A number of right-wing blogs have for years posited that Elmi, a British citizen, is Omar's brother based on a years-old Instagram post that identified him as the "uncle" of Omar's child. The agents are reportedly now looking into the possibility that Omar married Elmi in order to obtain a Green Card for the brother.