Klayman: Freedom Watch to Intervene in Tulsi Gabbard's Suit by Filing Amicus Briefs in Support of Gabbard!
Go to www.FreedomWatchUSA.org to Join and Support Our Leftist Media Strike Force! Share and Donate 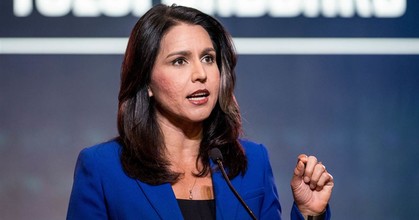 Tulsi Gabbard sues Hillary Clinton for $50M over 'Russian asset' remark
NBC News
January 22, 2020
Gabbard filed a defamation lawsuit Wednesday against Hillary Clinton seeking $50 million in damages, claiming the former Democratic presidential nominee "carelessly and recklessly impugned" her reputation when she suggested in October that one of the 2020 Democratic candidates is "the favorite of the Russians."

The lawsuit, filed in the U.S. District Court for the Southern District of New York, says it aims to hold Clinton and other "political elites" accountable for "distorting the truth in the middle of a critical Presidential election." It also says Gabbard suffered an economic loss to be proven at trial.