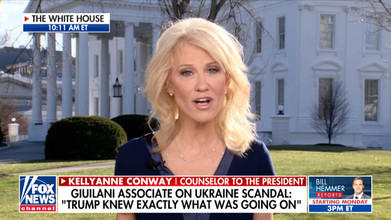 Kellyanne Conway Melts Down Under Grilling by Fox News
By Matt Wilstein
The Daily Beast
January 16, 2020
White House counselor Kellyanne Conway was asked four times by Fox News on Thursday morning to "flat-out" refute claims from Rudy Giuliani associate Lev Parnas that President Donald Trump was fully "aware" of what he was up to in Ukraine. She didn't give a straight answer once.

After Fox aired a clip of Parnas' interview with MSNBC's Rachel Maddow from Wednesday night, they asked her to refute his central claims. Conway first tried to laugh it off, joking with no sense of irony, "Remember, people who go on TV are never under oath." Meanwhile, the Trump White House has blocked witnesses from testifying under oath and criticized the credibility of those who have.

But that argument didn't satisfy Fox News anchor Bill Hemmer, who repeatedly grilled Conway on the substance of what Parnas was saying.