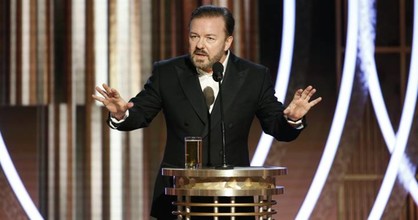 Gervais said the audience full of powerful TV and movie executives were all "terrified" of journalist Ronan Farrow, who won a Pulitzer for his reporting on disgraced Hollywood mogul Harvey Weinstein, who goes on trial in New York City on Monday for sexual assault.

Gervais told the crowd about Farrow: "He's coming for you."