Klayman: Trump's Message to Iranian Mullahs! Make Our Day!
Join and Support Our Coalition of the Jewish Right at www.FreedomWatchUSA.org 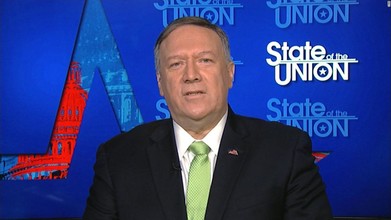 Pompeo backs Trump's threats to Iran as US braces for possible retaliation
By Devan Cole
CNN
January 5, 2020
Washington (CNN)Secretary of State Mike Pompeo on Sunday backed President Donald Trump's strong threats to Iran as the US braces for potential retaliatory actions by the country following an attack last week by US forces that killed Iran's top military leader.

"The American people should know that we will not waver. We will be bold in protecting American interests and we will do so in a way that is consistent with the rule of law," Pompeo told CNN's Jake Tapper on "State of the Union."

He continued: "We're trying to restore deterrence that frankly is a need that results directly from the fact that the previous administration left us in a terrible place with respect to the Islamic Republic of Iran ... we have developed a strategy to convince the Iranian regime to behave like a normal nation. That's what our strategy is about. We've been executing it."